We want everyone to be a part of this phenomenon, be sure you and your students are viewing the solar eclipse safely this year!

Standard: Develop and use a model of the Earth-sun-moon system to describe the cyclic patterns of lunar phases, eclipses of the sun and moon, and seasons.

First show that the Earth and moon move through space together as they are affected by gravity (from our point of view the moon orbits the Earth, but to an outsider, they both appear to orbit an invisible “center of mass”). For reference, the moon orbits Earth every 27.3 days. For phases of the moon, have pictures ready and move around to different positions as the moon is orbitting the Earth. When starting out, the "moon" is lit on the right half and dark on the left, this is a first quarter moon. Then move to the right, and show the full moon, third quarter, new moon, and repeat!

Now, does the moon rotate about it’s center to keep the same face of the moon facing the Earth? (Hint: it does) Now use the balls to outline why it does! (Draw an ‘X’ on one side)

Standard: Develop and use a model to describe the role of gravity in the motions within galaxies and the solar system.

Activity: Use a popsicle stick, chopstick, pipe cleaner, and 2 clothespins to demonstrate gravity

Balance the popsicle stick on the chopstick by tying the pipe cleaner around the popsicle stick and putting the clothespins on either side to make a new center of gravity (will now balance). This activity shows how centers of gravity work, this is how orbits work (but on a much smaller scale).

Standard: Analyze and interpret data to determine scale properties of objects in the solar system

Activity: Need to scale the moon and Earth down

Show the Earth as having a diameter of 16 inches (which can be represented by a beach ball), the moons diameter as 4.4 inches (a softball), and the distance between the Earth and the moon as being 40 feet! Now, orbit the moon around the Earth, and talk about scaling the distances up. Imagine how far you would have to go to add the sun to this activity!

Standard: The star called the sun is changing and will burn out over a lifespan of approximately 10 billion years.

Standard: Represent data in graphical displays to reveal patterns of daily changes in length and direction of shadows, day and night, and the seasonal appearance of some stars in the night sky.

Take some black paper to symbolize the night sky, then put star stickers on them in the shape of a constellation. Now, take a white crayon or piece of chalk, and draw how you think people long ago used to make pictures out of the stars! Use this as a tool to talk about which constellations are visible during different seasons. 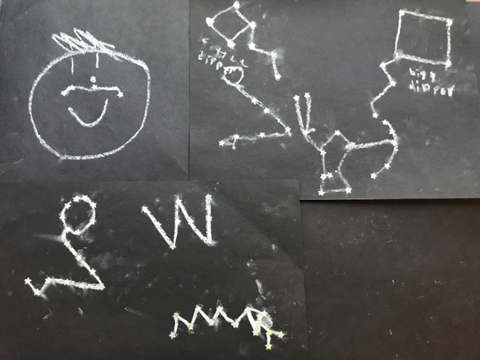 Standard: Use mathematical representations to describe a simple model for waves that includes how the amplitude of a wave is related to the energy in a wave. Develop and use a model to describe that waves are reflected, absorbed, or transmitted through various materials. Integrate qualitative scientific and technical information to support the claim that digitized signals are a more reliable way to encode and transmit information than analog signals.

Observe the spectra of various types of lights by using the diffraction grating films.

Use the sun’s energy to cook some tasty treats, such as the galaxy cookies, for eclipse day!

First cut a flap in the lid of the pizza box along three sides, leave an inch between the sides of the flap and the edge of the lid. 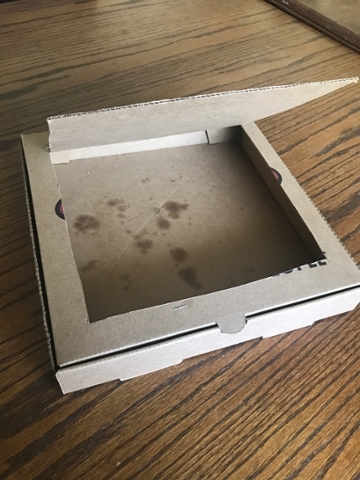 Then, cover the inner side of the flap with aluminum foil, this will allow it to reflect the sun’s rays. Use clear plastic wrap to make an airtight window for sunlight to enter the box.

Now, line the bottom of the pizza box with black construction paper to absorb the heat. Next, to insulate the oven, use rolled up newspaper at the bottom. Tape it on the border of the box, but allow the lid to still close without air leaking out. 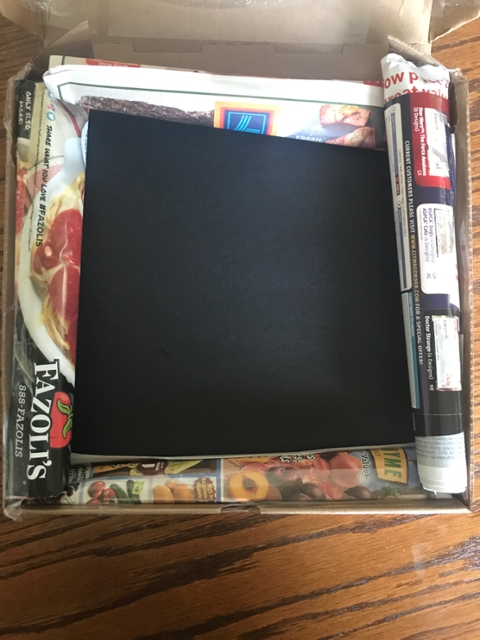 The solar oven is now ready to use. Make sure to prop the oven open with the ruler so that sunlight is reflecting off the aluminum foil, and enjoy the tasty snacks you cook! 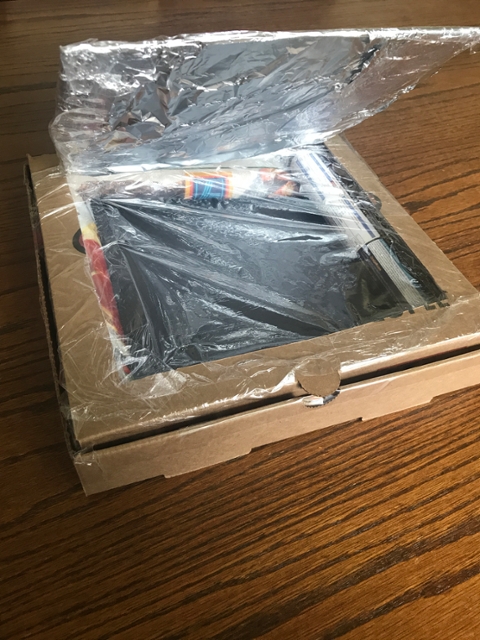 Solar ovens function as a result of energy that radiates from the sun, then reflects of the foil. This energy is stored in the oven and used to cook the food.

Apparatus: thumbtack, cardstock, and a piece of paper

Poke a small hole in the center of the cardstock, and place the piece of paper on the ground (this will serve as the "screen" to view the solar eclipse!). Now, stand with your back to the sun and hold the card a few feet from the ground. Play with the distance between the cardstock and the screen to bring the light into sharper focus. When the eclipse takes place, the circle will shrink and turn into a crescent. If it were a total eclipse, it would turn into a thin-lined "O."

This works because of the camera obscura effect, which is a natural optical phenomenon that occurs when a darkened box with a convex lens or aperture for projecting the image of an external object onto a screen inside.

Predict the Corona of the Eclipse (PBS Content Standard A)

During a solar eclipse, a corona (aura of plasma) can be seen around the dark moon. This is a great opportunity to teach about the layers of the sun. As a fun activity, have your students draw what they think the corona will look like! We would love to see their creations tweeted to our IU Science Outreach page @IUScihouse using #IUSolarEclipse2017. 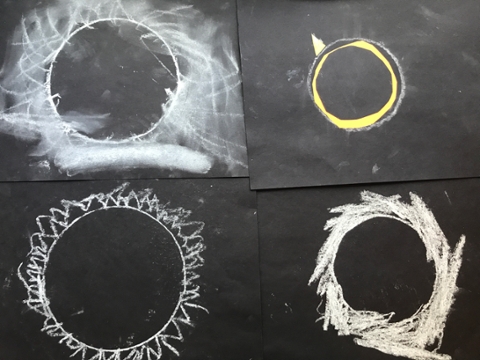 Attach the rod to the paper plate using clay, and use the sundial to observe the passage of time! Share your creations with us by tweeting @IUScihouse using #IUSolarEclipse2017.

Use this as an opportunity to discuss how location on Earth in relation to the sun determines the time of the location. As an example, compare 1 pm on the first day of school with the same time on the last day.

Observe the Passage of Time (PBS Content Standard A)

Use two different colors of chalk to trace your shadow at two different times to show the change in time and how that affects the angle that the sun hits the Earth, which is what results in the different looking shadow.

Make a time capsule to be opened April 8, 2024, the date of the next total solar eclipse! Put in items like a current newspaper, the picture of the predicted corona, and much more. Share what you put into your time capsule with us by tweeting @IUScihouse using #IUSolarEclipse2017.

These galaxy cookies are so good, they're out of this world! Gather your friends and try this fun recipe.

First, bake a batch of your favorite sugar cookies.

Second, use white, purple, black, and blue icing to decorate your cookies to resemble the galaxy.

Use short strokes and experiment with different amounts of different colors. Just have fun and really make these cookies your own! 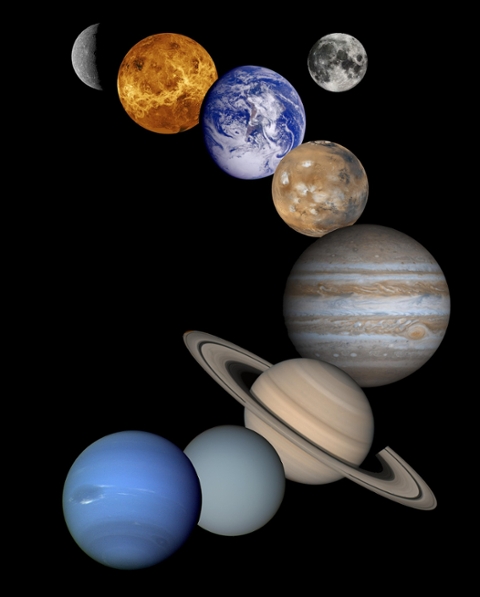 Use the following fruits to create a Solar System Kebab:
Phase of the Moon Lights

These decorative lights are sure to tie any solar eclipse party together!

First you'll need to gather black paper, white paper, a writing utensil, scissors, tape, stringed lights, and a round object to trace around. 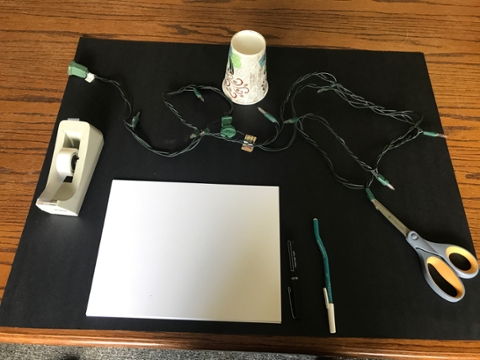 Then trace and cut out seven black circles and seven white circles: 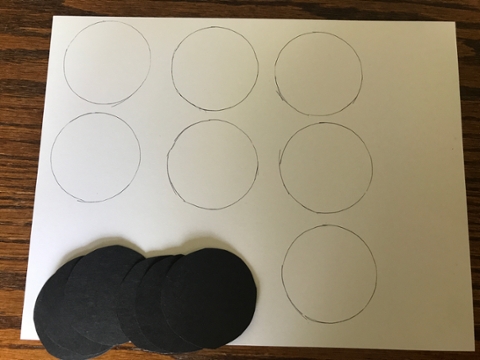 Last, use the tape and scissors to make them into the phases of the moon and attach them to the lights. 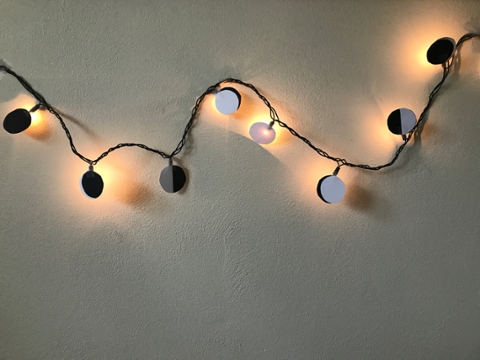 And now, you have the perfect decorations for your party!

The last total solar eclipse that was able to be viewed in the continental United States was July 7, 1972. So, take a trip back to the last eclipse and dress like you’re in the 70’s by wearing maxi dresses, mini skirts, knee socks, and patterns.

Play Solar Eclipse Jeopardy against your friends to test your eclipse knowledge!

Use our Solar bingo boards and vocabulary sheets and play with your friends!

In 1972, the year the last total solar eclipse was viewed from the United States, Pong became the first commercially successful video game, so celebrate the eclipse by playing with friends and family!

Here are a few snacks you can enjoy with your friends and family while you prepare to watch the solar eclipse:

The College of Arts + Sciences

The College of Arts & Sciences